Shodoshima Island is an island with a vibrant blue Seto Inland Sea and thousands of green olives. This time, let’s go explore the island from Sakate Port.

Situated between Kagawa and Okayama Prefecture, Shodoshima Island is the second-largest island in the Seto Inland Sea after Awaji Island, and a hidden treasure you can only be accessed by ferry because there is no bridge connecting it to the mainland.

Nonetheless, the island has a street lined with old soy sauce breweries, olive gardens and many other great spots, a charm that attracts tourists from all over the world.

This time we mainly traveled down to the east side of the island, from Sakate Port where the Jumbo Ferry that connects Kobe, Shodoshima, and Takamatsu is entering and leaving the port. 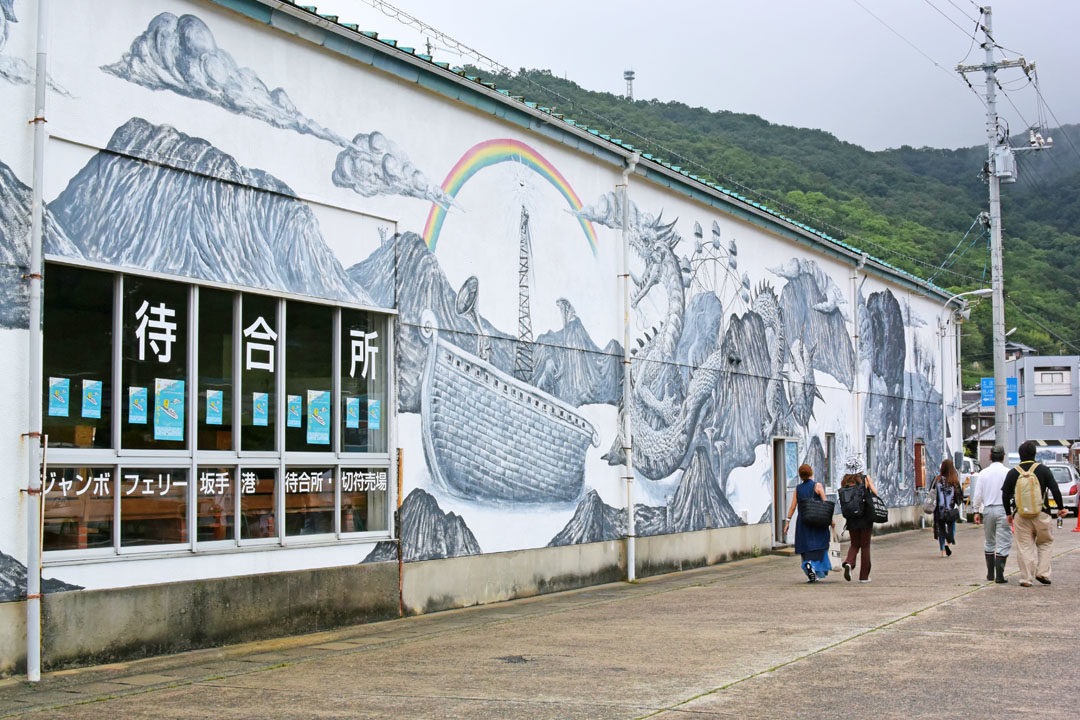 The Jumbo Ferries are docking at Sakate Port. There are several ports in Shodoshima Island, and many ferries are also entering Tonosho Port and Ikeda Port from Takamatsu.

When you arrived in Shodoshima, there are Shodoshima’s Olive Bus and taxi to get around the island. MAP 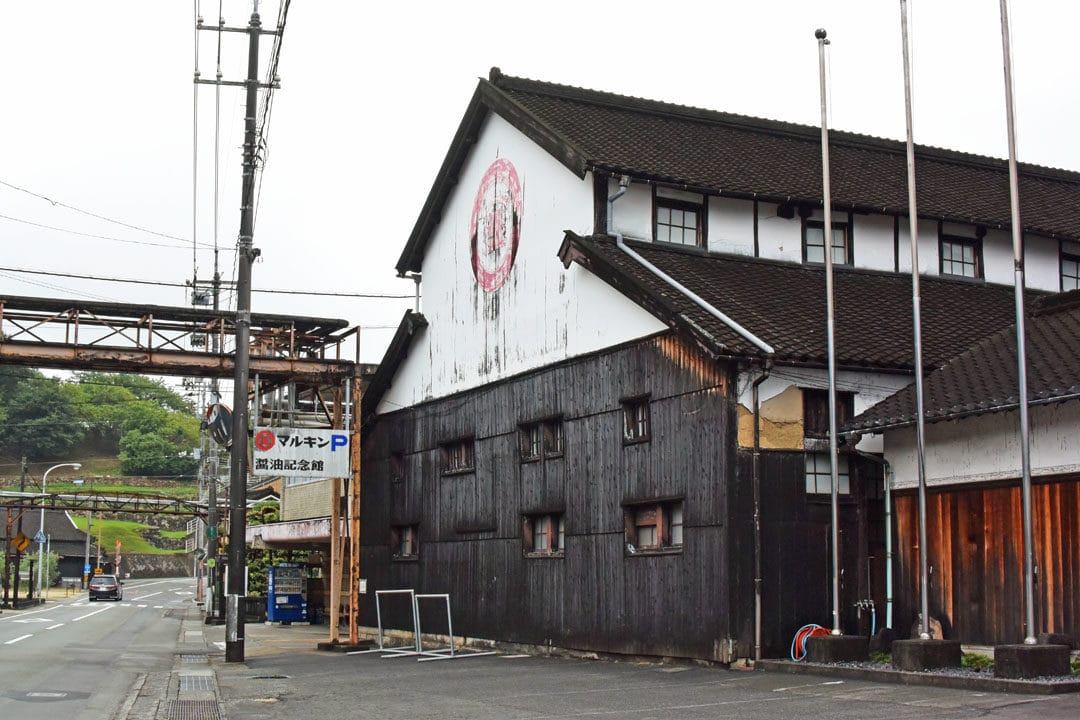 Hishio no Sato or Soy Sauce Village is an area where Tsukudani (seaweed cooked in soy sauce) factories and soy sauce warehouses are lined up. The traditional storehouses with traditional black wooden walls are looking strikingly authentic. 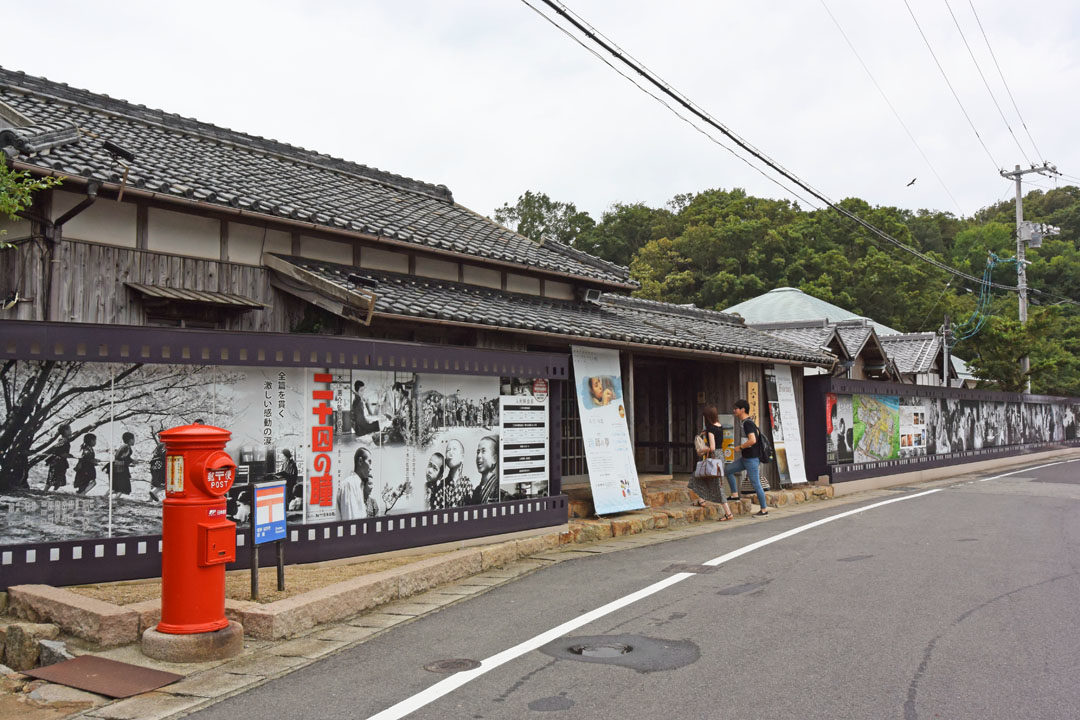 “Twenty-Four Eyes” is a novel by Sakae Tsuboi, the novel tells about the relationship of a female young teacher and her students who lived during the Second World War. The novel has been adapted twice into movies.

The movie studio recreates the atmosphere of the early Showa era, surrounded by old cityscapes, canal with Koi fishes swimming and sunflower fields. Here, you can immerse yourself in a nostalgic mood.

When you overlook the Seto Inland Sea from Branch School in the Cape, the refreshing breeze gently touches your face. 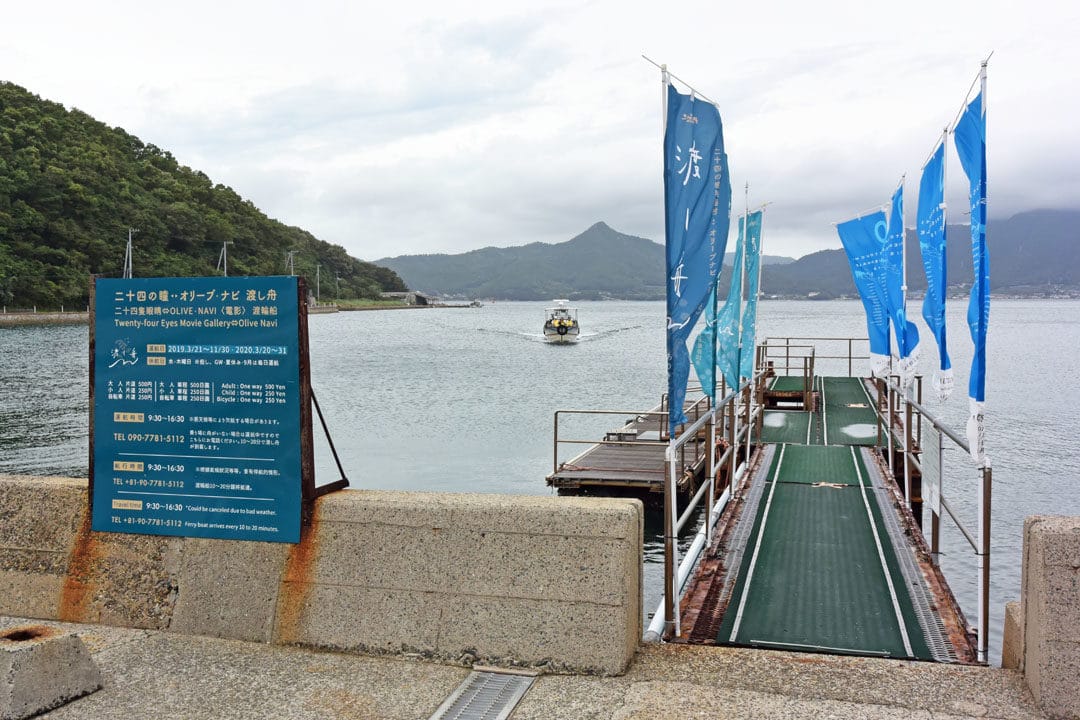 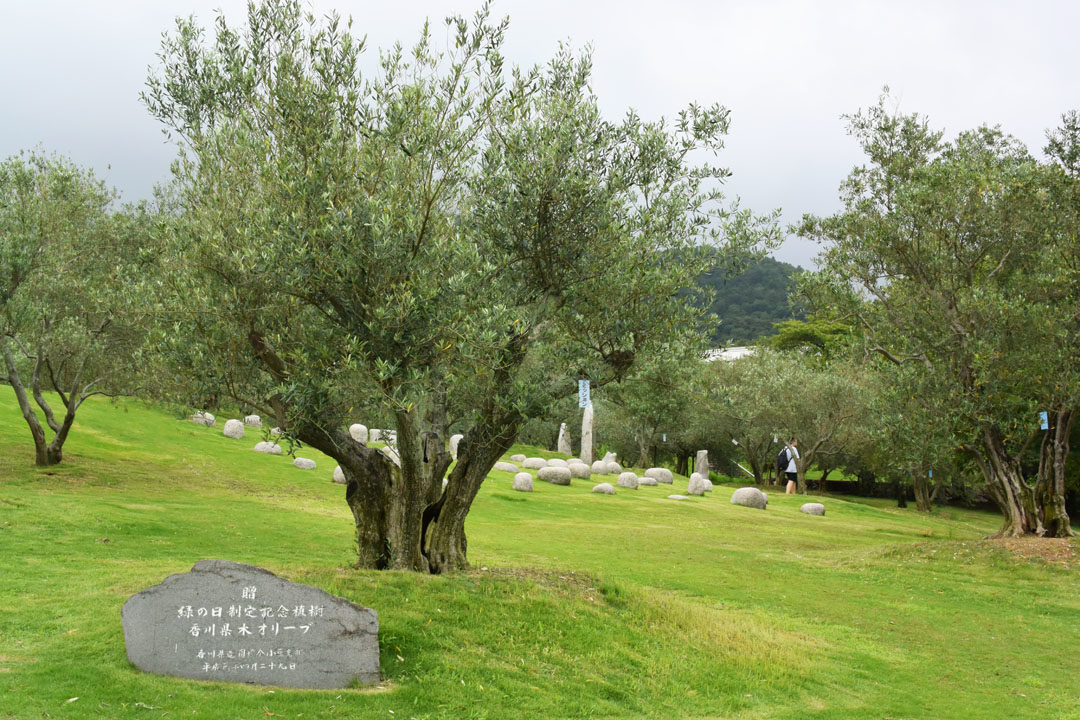 Shodoshima Island is the first area in Japan that can successfully cultivate olives.

Here, the Mediterranean Coast of Japan where olive cultivation is thriving, a park with a Greek atmosphere, where you can feel the blessings of Setouchi’s nature. 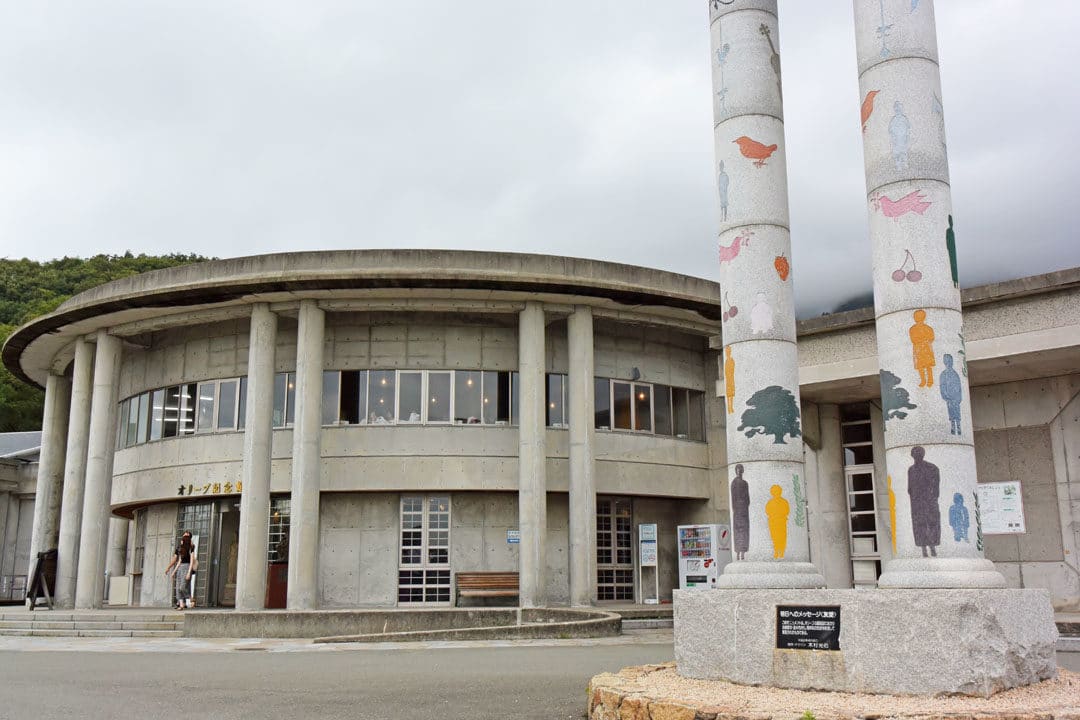 When you walk through the olive trees and walk up the park, you’ll find the Olive Memorial Hall on the top of the hill. The hall will introduce you to the history and culture of olives. The view from up here is also spectacular. MAP 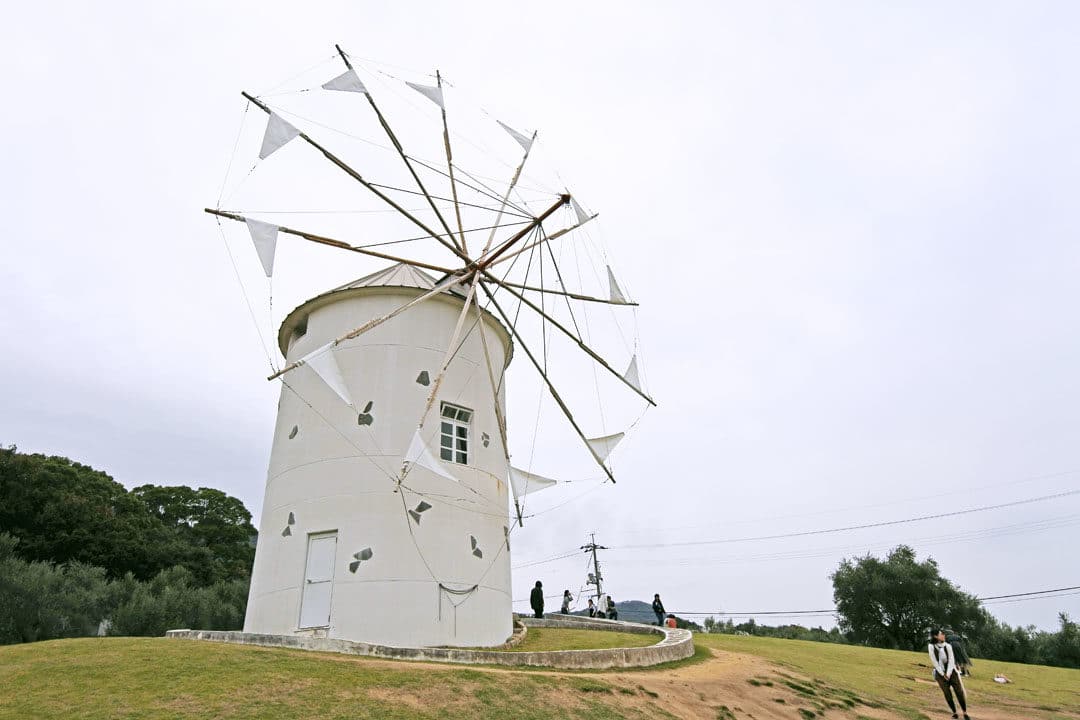 The strikingly elegant white Greek windmill on the top of hill is the iconic landmark of Shodoshima Island.

This windmill is known as the setting for the movie “Kiki’s Delivery Service”, about a young witch and her black cat. Just like Kiki, everyone can become a witch, just straddle a magic broom and take a picture. The magic broom can be borrowed free of charge from the Olive Memorial Hall from 8.30 am to 5 pm. But, you’d better train your legs first before hop on the magic broom. MAP

You’ll find that Shodoshima Island is quite large when you actually walk around it. So, we recommend you to at least make a two-day trip on the island.

Make a hotel reservation on the island during peak season is difficult, but since there is a relatively larger number of ferries from Takamatsu, Takamatsu would be a better choice to stay.

Take a 30-minute train ride from Wakayama Station to Kishi Station. A heart-warming trip to see "Tama", the station mast...

The Aegean Sea of Japan, Reminiscing The History of Korean Envoys

The warm sunshine shines on Greece’s Aegean Sea Place, a dreamy place to visit once in a lifetime. Japan has its own Aeg...